Mount Constitution, which tops out at 2,400 feet, is the highest point in the San Juan Islands. It’s located on Orcas, the largest of several hundred islands that make up the archipelago. ‘The name “Orcas” is a shortened form of Horcasitas, or Juan Vicente de Güemes Padilla Horcasitas y Aguayo, 2nd Count of Revillagigedo, the Viceroy of Mexico who sent an exploration expedition…to the Pacific Northwest in 1791.” Coincidentally, it’s spelled the same as the plural of orca, “the largest of the dolphins and one of the world’s most powerful predators.” The island’s name is pronounced OR-cus while the plural of the dolphin species is OR-cuz.

On a clear day, from a rock face along the eastern edge of Mt Constitution’s summit, you can see for miles. Mt Baker, St Helens, Rainier, the Olympics and the Canadian Rockies are a few of the more familiar sights. The quickest way to the top is by car. Google Maps indicates that the 4.7 mile trip from the start of Mount Constitution Road below to its terminus near the top is a 14-minute trip. For those in search of a challenge and even more scenery, two different trails will take you to the summit. On Saturday, May 12, five friends and I joined 189 strangers in a foot race to the top. The course begins in Camp Moran, follows two-thirds of the Cascade Lake Trail, ascends along the West Boundary and North Boundary Loop trails to the summit, continues along Little Summit Trail and returns runners to the West Boundary Loop and Cascade Lake trails to the finish. Total climb: about 3,800 feet. Total distance: about 14-miles. The same day, 95 runners completed the marathon distance and 44 ran a full 50 miles.

Seven weeks prior, on a cold morning in early spring, half of our group previewed the course. We arrived at a nearly empty parking lot at 8:00 am and spent the next four hours running, hiking, reading maps and trail signs and taking photographs as we made our way along the route during which we made but one navigational error that added a mere half mile to the actual route. With temperatures in the upper 30s, we weren’t surprised to encounter snow. The three of us completed the course together, mindful of the peace and quiet we experienced because of the cold cloudy weather that meant we would miss out on the view at the top, but not see a single soul getting there. When experienced at a leisurely pace, the hills didn’t scare us. We looked forward to returning in the future with our friends, hopefully, with better weather.

We decided to run separately, so we knew that someone would be the first of the group over the finish line. Several of us suspected it would be my sister, who at 55 is not only the oldest, but also the one with the fewest years of running experience. JoDee spends most of her trail running time at elevations similar to that of Mt Constitution, which provides the benefit of altitude training, a natural form of blood doping. To prepare for this likely result, I decided to shove her face in the dirt ahead of time so I wouldn’t have to do so afterward when I might be too tired. The prediction came true, so my shoving-her-face-in-the-dirt efforts didn’t go to waste. 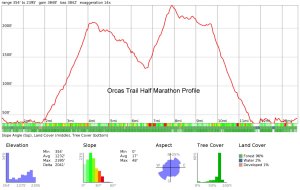 The race day weather forecast called for sunny skies with high temperatures in the 60s. At 5:00 am, as 55 participants in the 50-mile distance took off towards the trails, our group of six was asleep in our bunks in a rustic cabin dubbed Swan. Three hours later, we debated what to wear and carry as 100 marathon distance runners crossed the start line. At 9:00 am, race director Candice Burt called our last minute instructions and sent us off. For a third of a mile, we followed a paved park road to the start of the Cascade Lake Trail. The wind formed whitecaps on the lake’s surface, which dissipated to a light breeze along the trail. Just before the two-mile mark, I noticed the same sound at the same place I had last time: varied thrushes calling in the distance. The rush of water from Moran Creek filled our ears. Some of it spilled onto the trail. We ascended two miles to a loop with several miles of forested rolling hills that meandered towards a second steep section leading to the summit at mile eight. Two more miles of rolling hills took us along the last of the loop, past the cold springs and returned us to the final four miles, same as the first four. Once we had all crossed the finish line, we shared highlights of our experiences. 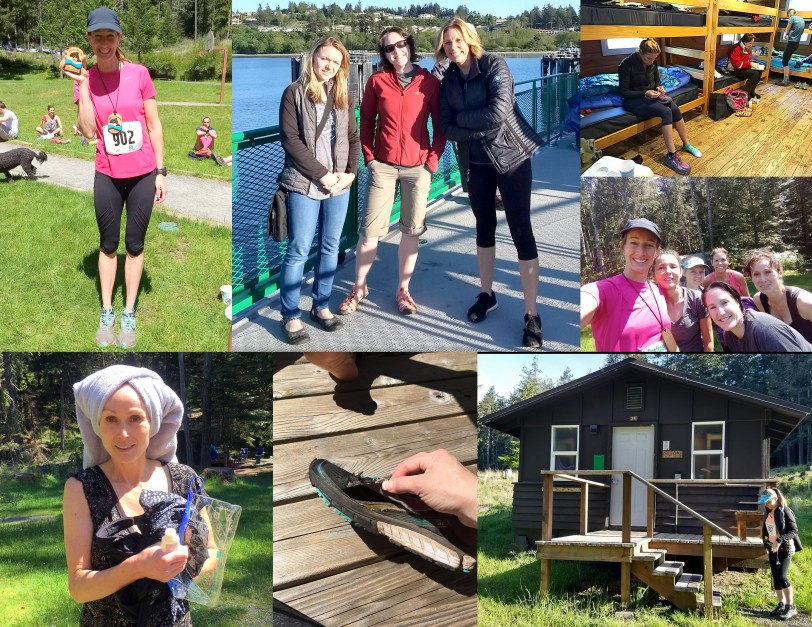 Afterward, we encountered and congratulated the overall winner of the half marathon, 47-year-old Christine Lundy a friendly, gracious elite runner from Sausalito, California. With a time of 2:01:20, she set a new course record for women and shaved 5:00 minutes off the old one. She completed the race an hour faster than the fastest of our group, which reminded us what we already knew: no matter how fast you are, there’s always someone faster (sometimes, much, much faster).

The fun we had adventuring together confirmed another thing that we already knew: completing a challenge is always better with camaraderie. We Pacific Northwesterners are blessed to live in a beautiful place filled with jaw-dropping scenery, miles of trails, acres of trees, the Salish Sea, and adventurers willing to take on challenges like the Orcas Island Trail Half Marathon…which I, for one, plan to never run again.