Lab Girl, The Lorax, The Hidden Life of Trees, and Me 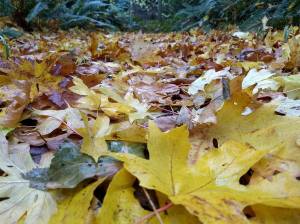 I used to think of trees as majestic, oxygen-producing shade-providers. Not anymore. Reading Peter Wohlleben’s The Hidden Life of Trees and Hope Jahren’s Lab Girl transformed my view about these slow-growing humanoids. Now when I make my daily visit to the woods, it’s with a mindset of concern of a level that only freeway rubberneckers can understand. I stop and gawk at the carnage of the forest: damaged bark, crooked trunks, fallen trees. The old me, in trucks piled high with limbless logs, would have seen future construction, the new me: hearses transporting dismembered corpses. I once found windstorms worrisome because of the danger they posed to houses and humans. I still do, but I worry about the well-being of the trees too. Wohlleben’s compelled me to pity the solitary orphan tree species trying to survive amidst others that are all related and those that line city streets, cramp-rooted and lonely. 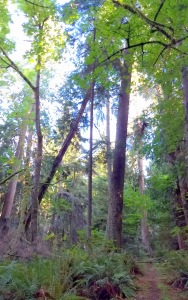 Doug Fir’s involuntary tree slaughter of a Hemlock (in progress) 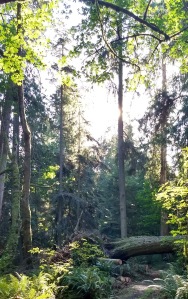 The aftermath: the two trees begin again as nurse logs

Wohlleben makes a good case for what he believes with a combination of observations and personal experiences acquired during a twenty-plus year career as a forester. He backs the content up with results of scientific studies. Trees, he proclaims, “communicate by means of olfactory, visual and electrical signals,” “have a sense of taste,” the “ability to see,” and “a sense of time.” They “shade their offspring” so they don’t grow too fast, “are capable of friendship and go to far as to feed each other,” “trees experience pain and have memories and tree parents live together with their children.” And when a slow-growing humanoid’s life ends, “the dead trunk is as indispensable for the cycle of life in the forest as the live tree.” In fact, “a fifth of all animal and plant species–that’s about six thousand of the species we know about–depend on dead wood.” Jahren, a geobiologist, shares more about the study of plants and seeds, “When you are in the forest, for every tree that you see, there are at least a hundred more trees waiting in the soil, alive and fervently wishing to be.” “In the right place, under the right conditions, you can finally stretch out into what you’re supposed to be.” 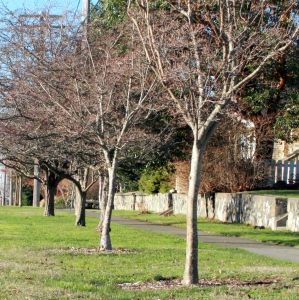 What I learned from Wohlleben and Jahren even changed my view of one of my formerly favorite books: Shel Silverstein’s The Giving Tree. The story of a selfless apple tree that provides entertainment, shelter, fruit, its branches and ultimately, its life to a Boy used to bring a tear to my eye. The new me is embarrassed by my misplaced sympathies of the past. The Tree deserves The Darwin Award for anti-evolutionary behavior. And the Boy’s actions towards the Tree are no better than that of the Once-ler. Had the Boy cared one whit about it, he’d have asked his parents to plant several more of a similar variety instead of carving initials into its bark, removing its branches, cutting it down and then resting atop what was left of his victim’s lower extremities.

Dr. Suess’s The Lorax contains the better message. The Once-ler, a man who, back in the day, pooh-poohed The Lorax’s admonitions about the damage he was doing to the Truffula forest and its creatures, confesses his complicity to a boy who comes calling. The last page has the Once-ler handing over the one remaining Truffula seed to the boy. But even if it defies its slim chances of survival, “The odds [of rooting] are more than a million to one against success,” this solitary tree will suffer without the chance to diversify its genes. An excerpt from Lab Girl, in which the author and her quirky lab partner Bill “brainstorm” a version of Silverstein’s book with “the most gleefully inappropriate material for such a thing,” highlights some of the witty, silly, over-the-top banter in which the two engage, “The Getting Tree…was about an arboreal parent figure that slowly cannibalizes its offspring because of its progressive and oblivious greed.” It ends with a raccoon chewing on the Boy’s arm which is no less unrealistic than The Giving Tree and many times more entertaining.

Look, Ma. I made it! (a Sweetgum sapling grows beneath its mother)

Some might find Wohlleben’s fringier contentions about trees hard to believe, but one thing is obvious to anyone who’s hung out with them: spending time in a forest is good for humans’ health, “The air truly is considerably cleaner under the trees, because the trees act as huge air filters,””…not only do trees filter materials out of the air, they also pump substances into it [including phytoncides].” “It’s possible that phytoncides have a beneficial effect on our immune systems as well as the trees’ health.” “Korean scientists have been tracking older women as they walk through forests and urban areas.” They found, “When the women were walking in the forest, their blood pressure, their lung capacity, and the elasticity of their arteries improved,” Wohlleben ends his book with a suggestion, “…when you take your next walk in the forest, give free rein to your imagination–in many cases, what you imagine is not so far removed from reality, after all!!”

Jahren adds soap-boxing and recommends, “If you own any private land at all, plant one tree on it this year,” Those of us in the Pacific Northwest have cheap, convenient access to forests packed with many species of slow-growing humanoids. My advice: Don’t waste money on electronics and other inside-use devices this holiday season. The best gift you can give your loved one is free. Take them to the forest. Spend time with the trees.

2 thoughts on “Lab Girl, The Lorax, The Hidden Life of Trees, and Me”