The second day of summer 2017 was the best one ever for a couple of stand up paddle boarders lucky enough to book a tour with Jennifer and Shawn McFarland of Sound Yoga and SUP. Moments after the leader suggested the group stand down and move towards the shore for a break, a pod of five orcas emerged from the swirling seas, made its way through the loosely-spaced group, and swam off to the south. Jenny Bull, paddle boarding for the second time in her life, was taking photos with her cell phone, so was in the perfect position to shoot a video of the unusual experience. Both KIRO and the SeattlePI reported the story and shared the video, licensed with Storyful, which has received nearly 250,000 views. Unfortunately, neither the videographer nor the licensing company were willing to share information about money to be made by viral videos, so I’ll just continue to wonder.

Ever since I met Jennifer in April of 2016, she’s been trying to take me out stand up paddle boarding “SUP,” one of her many passions that include: teaching at SVC, hiking, trail running, swimming and yoga. Not only does she take folks on tours, she teaches yoga both in studio and on paddle boards.

Have I mentioned. I hate yoga. 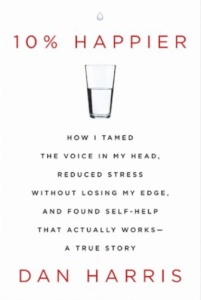 An excerpt (Pp 126-7) from Dan Harris’s book about mindfulness and mediation 10% Happier: How I Tamed the Voice in My Head, Reduced Stress Without Losing My Edge, and Found Self-Help That Actually Works–A True Story best sums up the way I feel when I attempt to meditate,

“I try to focus on my breathing, but I can’t keep up a volley of more than one or two breaths.

Holy crap. I think my feet are going to snap off at the ankle.

It feels like a dinosaur has my rib cage in its mouth.

I’m hungry. It’s really quiet in here. I wonder if anyone else in here is freaking out right now.”

That’s how I felt while trying to meditate during Jennifer’s yoga class, which I attended in studio several times before simply giving up. Second on my Things I Hate List: swimming. Third: being cold. Doing SUP yoga would give me the chance to do three things I hate at the same time, which is why I’ve never tried it. 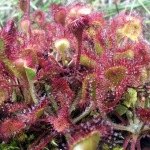 But Jennifer won’t take no for an answer. She finally figured out how to get me to say yes, offering my friends and I a group tour of Little Cranberry Lake with a promised encounter with a plant about which I’ve been obsessed for ten years, Drosera rotundifolia, the round-leaved sundew or common sundew, “The plant feeds on insects, which are attracted to the glistening drops of mucilage, loaded with a sugary substance, covering its leaves. It has evolved this carnivorous behaviour in response to its habitat, which is usually poor in nutrients or is so acidic that nutrient availability is severely decreased. The plant uses enzymes to dissolve the insects – which become stuck to the glandular tentacles – and extract ammonia (from proteins) and other nutrients from their bodies. ” According to Plants of the Pacific Northwest Coast (P 351), “Sundews are commonly pollinated by the same insects they ensnare in their sticky tentacles and use for food: mosquitoes, midges and gnats.” Oak Harbor Elementary School Art Specialist Karen Merrill first introduced me (along with her 2nd-grade students) to the plant in 2006 when I volunteered in her art room. I’ve been obsessed with it ever since but had never seen one before.

On July 27, four of us joined Jennifer at the north end of Little Cranberry Lake for a paddle boarding adventure. After providing safety instructions and adjusting our paddle lengths, she sent us off in a kneeling position near the shore before suggesting we brave the slightly scarier experience of standing up in deeper water. It was a group tour and lesson, so she explained proper techniques, which we tried to employ, mostly successfully. It wasn’t long before we neared the south end of the lake, where the sundew plants live. My tourmates barely blinked before gliding past while Jennifer sent me over to observe and photograph the surprisingly small plant. I can’t believe it took ten years for me to see a species that has lived nearly right in my back yard. We floated over logs and past bogs for nearly an hour before returning to our departure point. Nobody fell in and we couldn’t’ wait to go again. 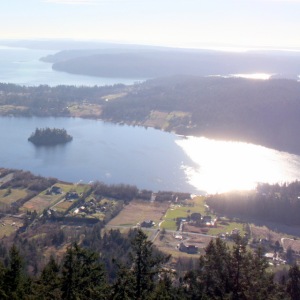 A month later, Jennifer took us on a second guided tour and lesson at Campbell Lake, which, according to Department of Ecology, is “…a shallow kettle lake carved by glacial activity. It receives water overflow from Erie Lake, Whistle Lake, and Trafton Lake, along with input from intermittent streams. [It] discharges into Puget Sound.” Our goal: circumnavigate the tiny 3.32 acre nameless island, owned by the State of Washington and Department of Natural Resources.

The water was flat calm as we departed from the boat launch and headed towards the island. There wasn’t much to it except a bunch of trees and rocks with steeply sloped sides, so we continued towards a mass of lily pads near the Naked Man Valley area of Deception Pass State Park and passed by The Rock, a 20-acre parcel once owned by a famous artist named Morris Graves. Paddling through Yellow Pond Lily stems was a challenge, but the location gave us a great view of Mt Erie. A slight breeze came up as we left the lily pads and crossed from the south to the north side of the lake. We heard a splash and noticed one of our group members pull herself back onto her board. Even the best paddlers (and she was) get wet sometimes.

Two weeks later, when I crossed the Deception Pass Bride from Whidbey to Fidalgo Island, I noticed that the often swirling waters of the pass were calm. My first thought was that of a SUP Convert: looks like the perfect conditions for stand up paddle boarding.