If I Only Had a Brain

Scarecrow and Tin Man didn’t know how good they had it. According to the National Science Foundation, “With few exceptions, jellyfish are brainless, bloodless, boneless and heartless, and have only the most elementary nervous systems.”

Every Whidbey and Fidalgo islander has likely encountered a rusty-maroon eight-lobed blob lying along the shore: Cyanea capillata or Lion’s Mane jellyfish. RedOrbit says it’s, “the largest and longest jellyfish known and one of the longest animals in general…Though most of its life the jellyfish is pelagic [living in the open sea] it tends to settle in sheltered, shallow bays near the end of its one-year lifespan…[they] usually remain near the surface of the water, no more than 66 feet deep…The Lion’s Mane jellyfish are mainly spotted during late summer and autumn when the jellyfish have grown large in size and the currents of the water begin to pull the jellyfish near the shore.” 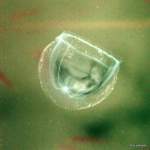 Another local species: Mitrocoma cellularia aka the cross jelly. This smallish species has been abundant at Deception Pass State Park during the last couple of years. I’ve observed cross jellies from the docks at Bowman Bay, Cornet Bay, Sharpe Cove and the Urchin Rocks at Rosario Beach. The Invertebrates of the Salish Sea site is a great place to find information about jellyfish and other sea creatures. It lists their size as “up to 4 cm.” With a maximum bell circumference of πD≅125 mm and “up to 350 tentacles along the margin of the bell,” the alternating long and short tentacles are tiny-with nearly 3 tentacles per 1 millimeter of bell length. “The 4 long, thin radial canals with the long, thin gonads attached to them make a distinctive cross shape which is easy to recognize.” Coolest thing about this jelly, “It luminesces if disturbed in the dark.” “Researchers from the Monterey Bay Aquarium Research Institute surmise that cross jellies…can “smell” prey through chemicals in the water.”

Too bad they can’t smell predators. This fall, at the Cornet Bay dock I noticed an encounter between a cross jelly and a third locally common species, Phacellophora camtschatica, or egg-yolk jelly, a relative of the Lion’s Mane. It was attempting to do what the Monterey Bay Aquarium site says they do in the very way they’re expected to do it, “This massive jelly usually drifts motionless or moves with gentle pulsing. Acting like an underwater spider web with a mild sting, an egg-yolk jelly captures other jellies that swim into its mass of tentacles.” The egg-yolk jelly snagged a cross jelly with a tentacle and then slowly pull it towards its bell.

Walla Walla University owns and operates the Rosario Beach Marine Laboratory which, “exists primarily for the training of undergraduate and graduate students in marine, field, and experimental sciences in a Christian setting,” and maintains the Invertebrates of the Salish Sea site. I checked in via email with Dr. David Cowles, WWU Professor of Biology, about jellyfish in the area of the Lab and Deception Pass State Park. The Salish Sea by Audrey DeLella Benedict and Joseph K. Gaydos defines the expanse of the body of water that includes the waterways of Whidbey and Fidalgo islands as (p xi), “the Puget Sound, the Strait of Juan de Fuca, and the Strait of Georgia.”

I mentioned that I hadn’t seen a Cyanea capillata in over two years, not since I’d helped one escape imminent stranding in Sharpe’s Cove opposite Rosario Beach by moving a floating log blocking its way to deeper water (It probably waited until I was out of sight, then properly stranded itself). Although Lion’s Mane jellyfish are nowhere to be found lately, during the past two summers (they tend to disappear in late fall) I’ve seen many Phacellophora camtschatica and Mitrocoma cellularia in recent years, significantly more than in the years before.

Dr. Cowles wrote, “I have also definitely noticed that the abundance of different jellies in the area changes dramatically over time. It appears that the population dynamics of most jellyfish are not well understood. At least I have not seen many explanations in the scientific literature. Certainly, some are seasonal, such as the Aequorea victoria, which tends to be more common in late summer. Cyanea capillata is usually one of the more common ones, but although I searched multiple times I could not find even one all last summer. I have no idea why. On the other hand, the Phacellophora camtschatica were very abundant, as you noticed as well.”

And what about the strandings? “Jellyfish often do things that do not seem to ‘make sense’, like stranding themselves. Although they do have a very simple nervous system they do not have a brain, and that could be why. They seem to respond to very basic cues such as temperature, gravity, and water movement in stereotyped ways that on average work well for the population, but may not make sense for a particular individual. Most of them have a ‘statocyst’ organ which helps them tell which way is up, but many of them do not even have eyes. It is really doubtful that they ‘know’ anything, since their nervous system is much less complicated than even a fly’s.”

Late this summer, I took a ride with Deception Pass Tours and saw what the guide called “a swarm” of egg yolk jellies. The Smithsonian site defines it as, “an assemblage of jellies” aka “a smack.” Fun facts from the same site: “Jellies are 95 percent water;” “there is evidence that jellyfish predate dinosaurs by some 400 million years;” and “a species of jelly called Turritopsis nutricula may be immortal. The jelly reportedly can play its lifecycle in reverse, transforming from an adult medusa back to an immature polyp.”

One last thing I wondered. Have all 13 species listed at the Invertebrates site been observed at Rosario? Dr. Cowles replied, “Most of the jellyfish on my web pages were found fairly near Rosario. Some of them were from as far away as Friday Harbor. Also, many jellyfish are quite small—the size of a raisin or small grape. There are still quite a few species out there that I have not found yet, so I am still looking!” This time of year-when we are busy focusing on the holidays-is a great time to take a walk in the woods or along the shore, stop and smell the roses…mushrooms…marine life!