Lying flat on my back on the wet grass after the race, a guy behind me says, “That was hard as f&*#.” I smile and say to my sister, “What he said.” The previous afternoon, as JoDee and I previewed the final mile of the 30K/50K courses, she was tearful. My sister had injured her IT band several weeks prior and had to sit this one out. We watched the last few 50K-ers crossed the finish line.

On a cool, foggy Sunday morning at 10:00 am, I set out with 154 others on a quest to climb 3,800 feet (more like 3,900) over a distance of 18.6 mi (um…19.8) within the 6 hours allotted in the Oregon Coast 30k. Minutes before, I was hanging out in a covered area. A pair of ponytailed identical twins discussed race strategy to my right and Glenn Tachiyama, best running photographer ever, to my left. I hoped that my choice of clothes was right as I walked over to the start line. Others’ apparel ranged from long tights with rain jackets and hats to sleeveless shirts and shorts, including the eventual winner, a 38-year-old local guy named Rob Russell who cut nearly 8 minutes off the previous course record, completing it in 2:48:38, about 8:30 min/mi pace!

We started out on bumpy ground, perfect for ankle-twisting, just north of the Adobe Resort in Yachats, a small coastal town with a population of about 700 persons. Pronounced YAH-hahts, the name comes from the Siletz language, and means “dark water at the foot of the mountain.” Race director James Varner instructed: trail may be muddy, so pass on the uphill side; tell someone if you decide to drop out, and race cutoff times will be strictly enforced; then we were off. The swarm ran along a flat paved section with an ocean view. Less than three miles later, we crossed Highway 101 and reached Amanda’s Trail, which looked like something out of a fairytale. The forest canopy darkened the short blackish branches of the Sitka spruce-lined trail. Mushrooms, mostly in shades of brown, glistened with moisture. I regretted leaving my camera behind, but knew that taking photos would have slowed me down.

According to a 7 July, 2016 article Amanda Trail is a beautiful hike with a dark history on the Oregon coast by Jamie Hale, “This scenic 3.7-mile stretch of the Oregon Coast Trail, running from Yachats up to the top of Cape Perpetua, is officially known as the Amanda Trail (also known as Amanda’s Trail). The legend of the trail is no secret, but it contains a darkness many Oregonians would rather forget,” “The trail runs through the former Coast Indian Reservation, established via treaty in 1855 with the Coastal Tribes of Oregon…as hostilities between the native population and settlers grew, volunteer militias known as the “exterminators” began to round up the tribes of southwest Oregon and confined them to the new reservation on the Pacific….Corporal Royal Bensell documented his company’s time catching “Squaws” and “Bucks,” which in spring 1864 included a Coos woman named Amanda…She left her husband and young daughter behind as Bensell and his company began the long march up the rugged coastline to Yachats…After 10 days of walking, the band reached Yachats. The company turned over the natives to the Indian Agents and, according to Bensell “we all left relieved.” Amanda’s fate from there is a mystery, but the fate of the Coast Indian Reservation is well documented. By 1875, the entire reservation was dismantled for white settlement, the remaining tribal population removed to Siletz and Grand Ronde Reservations.” 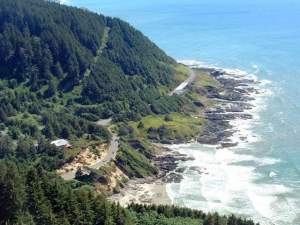 Early on, rain began to fall and the trail became a sloppy mess for a couple of miles. I dreaded the thought that it would continue for the rest of the race. Luckily, I was wrong. Even before I reached the Cape Perpetua Lookout at mile 6 and heard the cameraman’s shutter clicking, I was done with the muddiest section and wouldn’t see it again until near the end. There was no time to stop and be mindful of the best view along the course. I’d reached the descent of the first hill. A great feeling, but I couldn’t let go of the thought that I’d be running back up this same section later.

At about mile 7, I  continued past the first checkpoint because I was carrying my own electrolyte drink and began the ascent of the middle hill, that reached its peak at mile 11: 1,200 feet above sea level. I had dreaded this part, thinking that I’d be doing a lot of walking, but it turned out to be less steep than other two hills. This loop along Gwynn Creek Trail turned out to be my favorite part of the course. Salal and sword ferns lined the super soft, pine-covered trail that meandered through a grove of gigantic Sitka spruce trees. I’d talked to several runners earlier in the race, here I was alone, and it was awesome. I thought I’d reach an obvious summit, but it didn’t feel that way. The course followed a valley to a ridge and then along a ridgeline. I’d been near a young gal whose name I did not know, Pole Vaulter Girl, for a while, but she said she needed to “embrace gravity” and did, dashing down faster than I could.

I skipped the aid station at mile 13 and headed up the hill. Pole Vaulter Girl called back, “Are you coming?” So, I tried to stick with her, walking the hillier parts and running the flatter ones in hopes of keeping up. Back at the Cape Perpetua Lookout, a spectator called out, “It’s all downhill from here,” to which I replied jokingly, “That’s a lie.” I knew that we had at least a mile of difficult climb left. And we did. I picked up the pace as I descended Amanda’s Trail, crossed the highway and slogged along the flat paved section nearly a mile beyond the beep of my watch after it signaled Mile 19 on the 30k (18.6 mi) course.

Four hours, twenty-one minutes and change later, I reached the finish line, high-fived James Varner, and lay down on the grass. The fact that Kiki Graf, two years older than me, finished 14th overall, 3rd of the 75 female finishers, and less than 20 minutes behind the 29-year-old first female finisher impressed me. The race was so difficult that afterwards I thought I’d never want to do it again. Days later, since I survived, I totally want to do it again. I’ll be back next year with my sister, and all the friends I can convince to join us.