In a small patch of March’s Point in Anacortes is a big secret: a heron rookery, also known as a heronry.

Padilla Bay National Estuarine Research Reserve claims, “The heron colony on March’s Point is believed to be the largest nesting area for Great Blue Herons in all of Western North America. Herons have nested at this site on Padilla Bay since the late 1970s. In 1984, just 42 nests were counted at this site, with a steady increase ever since…Now we think there are about 600 but we not able to count them all because many are on private land….March’s Point is located near three productive estuary bays; Fidalgo, Padilla and Similk. These and the farm fields of the Samish and Skagit river deltas, provide herons with areas to hunt for fish, frogs and small mammals. The proximity of so much rich foraging habitat makes it ideal for finding enough food to satisfy hungry, young chicks….They usually gather in colonies around late February to early March to build nests and find mates…Nests tend to be high in trees, sometimes many nests in one tree. They may be a flimsy collection of sticks 18 inches across or older nests, used year after year, may be bulky and up to 3 or 4 feet across. There are usually three to seven eggs per nest…Eggs incubate in 25 to 29 days. Both parents sit on the eggs, turning them about every two hours with their bill. Both parents also help feed the young by regurgitating food such as fish into the mouths of the young…Young birds begin to take flight about 60 days after hatching and abandon the nest after 64 to 90 days.” The secret is now out, due to a large protest of the nearby refineries scheduled for this weekend, especially concerns about the protesters’ presence potential detrimental effect on the heron.

The southeast corner of March’s Point (see green box) is the home of the heronry, but most of March’s Point proper is the site of two refineries, Shell Puget Sound Refinery and the Tesoro Refinery Anacortes. The Introduction to Anacortes page of the City of Anacortes’ site says, “on March Point’s meadows, land was being quietly acquired by Shell Oil as a site for a refinery which promised to fill gaps in the economy left by closure of several mills. The arrival of Shell in 1953 and Texaco in 1957 created jobs for locals and brought in a wave of newcomers to the community.” That means that the heron arrived on March’s point about 20 years after the refineries were built. Shell claims, “Currently, the plant processes as much as 145,000 barrels (5.7 million gallons) of crude oil per day…The refinery is the single-largest taxpayer in Skagit County, and also one of the area’s largest employers. Shell supports roughly $80 million in salaries and wages per year for the roughly 700 employees and contractors at the Puget Sound Refinery. According to a recent Western Washington University study, Shell and the neighboring refinery account directly for roughly 2% of the total employment in Skagit County, but support 10%-14% of all jobs in the county.” Tesoro’s web page adds that their refinery produces 120,000 barrels of crude oil per day and employ 350 full-time workers.

SkagitBreaking.com reports that this weekend Break Free Pacific Northwest, “has announced plans to “rally against fossil fuels” over a  three-day period in the March’s Point area where two refineries are located. According to their website, “between May 13th and 15th, climate justice activists across the Pacific Northwest will gather in Anacortes, WA and in a creative demonstration,  blockade all entrances to March Point by land and water with hundreds of folks engaging in nonviolent sit-ins, blockades, and kayaktivism.” About possible harmful effects on the March’s Point Heronry, the organization assures, “We have also heard concerns about the potential impacts of large groups of people gathering near the heron rookery at the southwest corner of March Point. We are committed to making sure that our presence won’t disturb the herons during their breeding season, we are consulting with local experts, and we are planning all of our activities well away from that unique and precious habitat.”

Drive, bike or run the 7.4 mile road that follows the perimeter of March’s Point for great views of spectacular scenery: Mt Baker to the east, Guemes and the San Juan Islands to the north and Anacortes is to the west, and birds. In August, travel part of the distance on foot by running the Anacortes Art Dash half marathon or, in late June, the Tesoro March Point Run .

On a recent trip around the loop (while a white truck conspicuously marked “Security,” followed), I observed ducks, eagles, Canada geese, a seal (dead-on-road) and one of my favorite sights: a flock of small birds flying in tight formation that sparkled in the sun. My guess: the Black turnstone or similar.

I first learned of the existence of the heron rookery during a visit to the Padilla Bay Interpretive Center. A display provides information about the site and the heron cam that supposedly operates M-F 9:00-5:00 during nesting season, but is currently out of service.
To see more heron action in person, follow Highway 20 west and exit onto March’s Point Road South just past the Swinomish Casino. Follow MPRS about half a mile to a large gravel pullout (green square on the map) and walk back along the road’s very narrow shoulder about a quarter mile towards the southeast. Expect to see dozens of heron flying between the breeding grounds and the waters nearby, often carrying twigs and sticks for their nests.

During my first few trips out to find the heronry, the trees were bare of leaves, so the nests were easily visible.

As luck would have it for the birds, the further into the fledging season, the more leaves (primarily maple) appeared to block a bystander’s view of the action. There is also no place to pull out within the limits of bird watching access, which is why it makes sense to continue beyond the heronry limits and walk back. Herons, when hunting, are typically kind of quiet. Most of the calls I’ve heard have been territorial warnings of the low honk type. Along the road adjacent the heron rookery now, it’s loud with the awesome sounds of adults and their young.

And until I’d seen nests in trees, I’d have guessed they placed them nearer the ground. You can see these biggish birds perched along a branch near or atop a smallish nest. Eagles build enormous nests much higher up, including several located along March’s Point Road, like the one shown below. Apparently, sometimes nesting eagles locate within or near a colony of nesting herons. Parents protecting juveniles likely feel unsettled with eagles in their midst, but they police the area, protecting the heron from other predators.

“Male Great Blue Herons collect much of the nest material, gathering sticks from the ground and nearby shrubs and trees, and from unguarded and abandoned nests, and presenting them to the female. She weaves a platform and a saucer-shaped nest cup, lining it with pine needles, moss, reeds, dry grass, mangrove leaves, or small twigs. Nest building can take from 3 days up to 2 weeks; the finished nest can range from a simple platform measuring 20 inches across to more elaborate structures used over multiple years, reaching 4 feet across and nearly 3.5 feet deep. Ground-nesting herons use vegetation such as salt grass to form the nest…Males arrive at the colony and settle on nest sites; from there, they court passing females. Colonies can consist of 500 or more individual nests, with multiple nests per tree built 100 or more feet off the ground.” 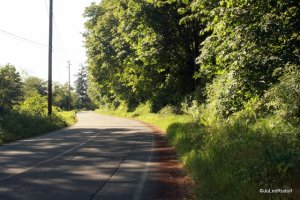 During several trips this spring to the area of the rookery between March and May, bird activity increased significantly over time. If you brave a walk along the narrow shouldered road, pay attention to the sounds not only of the heron, but other birds like sparrows, towhees, eagles and hawks; check out the tadpoles transforming into frogs in the ditch; and enjoy the wildflowers, like Herb Robert and Nootka Rose. My advice: skip the camera, (the birds don’t come closer than about 100 feet from the ground, usually higher), take your binoculars and, most importantly, your quiet. Plan half an hour to walk and watch, then take a driving tour across the tracks and around March’s Point. 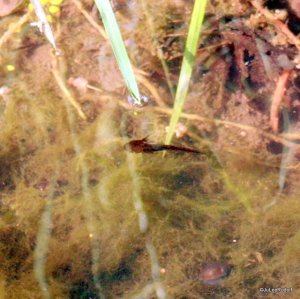