Leave it to Beavers

Hear that sound? It’s a call to action for North America’s largest rodent to make it stop: running water. Of all of the species of rodents in the world, Castor canadensis is second in size only to Hydrochoerus hydrochaeris, the capybara. My curiosity about this creature began while I was running. During a morning trail run, not far from the finish of a five mile loop around Little Cranberry Lake, we traversed Trail 12, which parallels Little Beaver Pond. Upon arrival, we did what we usually don’t: came to a dead stop, only because it would have been impossible to miss the conspicuous signs of beaver activity: fallen aspens with their ends formed into points on either side of the spot where the trunk separated from the stump and piles of wood shavings situated near upright trees with bare-bark spots ranging in size from smallish to largish. The the icing on the beavers-have-been-here cake: a lodge! Ever since that day, I’ve been determined to encounter one of the animal kingdom’s most amazing engineers in the wild. Unfortunately, on more than a dozen trips to Little Beaver Pond, I’ve been shut out. In the meantime, I’ve watched a documentary entitled Leave it to Beavers and looked up information online at places like the Department of Fish and Wildlife site, “Beavers have poor eyesight but excellent hearing and sense of smell,” and ” Sounds…include whining (noises made by kits), a breathy greeting noise, and loud blowing when upset,” that transformed a spark into a flame. Here’s a quick listen at one of the sounds they make. 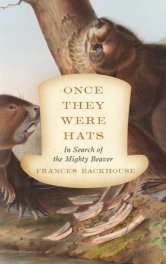 It’s also why, when I noticed the paperback Once They Were Hats at Watermark Books in Anacortes, I bought it on the spot. The back jacket blurb provides a perfect summary, “Frances Backhouse examines humanity’s 15,000-year relationship with Castor canadensis and the beaver’s even longer relationship with North American landscapes and ecosystems. From the waterlogged environs of the Beaver Capital of Canada to a bustling workshop where craftsmen make beaver-felt cowboy hats, Backhouse sifts through the millennia of castorid existence in the company of paleontologists, arhaeologists, First Nations elders, historians, hatterss, fur traders, trappers, and, of course, beavers.” In Chapter 8 The Mighty Beaver, she accompanies a biologist named Dr. Greg Hood, “a senior research scientist with the Skagit River System Cooperative” to reach beaver dams and lodges by way of skiff to Steamboat Slough, part of the Skagit River Delta located in the north part of Everett about an hour from Oak Harbor (174-175), “The truly unusual thing about Skagit Delta beaver dams is that they get completely submerged every time the tide comes in,” “mapping and measuring the length, width and depth of low-tide pools–those created by beaver dams, as well as depressions formed by bank slumps or driftwood–along 13 kilometers of tidal channels in the shrub zone…When he crunched the numbers generated by his field research, the results were striking: the presence of beaver dams quadrupled the amount of low-tide pool habitat in the channels, and the pools held 12 times more juvenile Chinook salmon than the shallows.” He learned that beavers were, “providing low-tide refuge for these fish.” When I realized that these beaver dams and lodges were so close, I studied Dr. Hood’s map from Beaver in Tidal Marshes: Dam Effects on Low-Tide Channel Pools and Fish Use of Estuarine Habitat (Fig. 1), which shows the location of over “125 beaver dams and 14 lodges.” Unfortunately, I own neither a skiff nor a kayak, so I had to give up on my plan to see them in person. 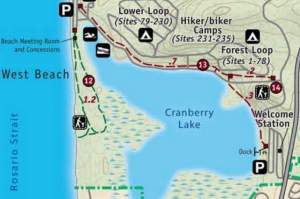 Amidst my obsession, I came upon an article in the WNT, 2015 was a busy year for state park, that contained an important fact: Deception Pass State Park’s Cranberry Lake is home to beavers. In early January, I stopped by the DPSP office, and asked Ranger Aggergaard about the article. He smiled, grabbed a campground map and marked on it locations he’d seen beavers: along the north side of Cranberry Lake where the park road follows the shoreline from east of the swimming area to just west of the dock. 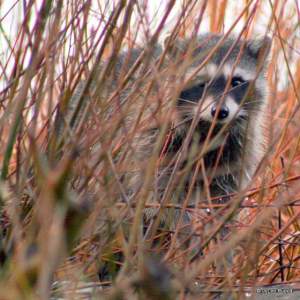 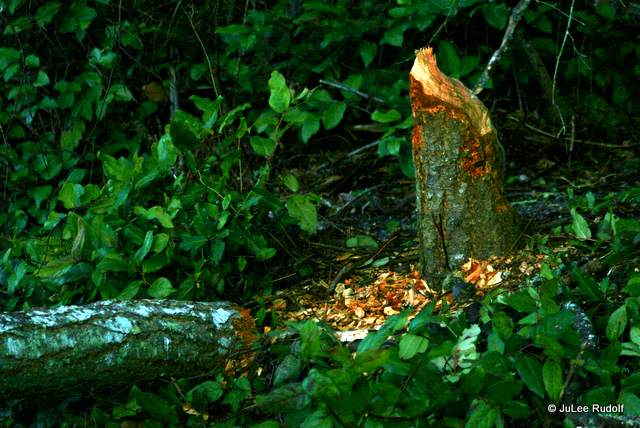 The following morning, I returned on a reconnaissance mission on a day with clear skies and temperatures in the forties–too late, I knew, to see the nocturnal creatures. At the specified (first) pullout, I spied: cormorants, Canada geese, mergansers and some sparrows. Near the first entrance to the campground, I found the beaver-felled-trees that had been removed to within a foot of the break point. At the last pullout before the parking lot, I noticed a family of raccoons, which I’d never seen before in the Park. Off towards Rosario Strait, gulls circled a crabbing boat as the crew pulled its pots with the snow-capped Olympics as a backdrop. Walking along the swimming area, lake water pressing underneath a layer of ice made sounds like cricket chirps. 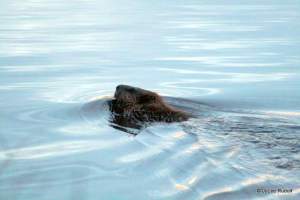 Two days later, I arrived at 7:45 am, parked at the first pullout, cut my lights, rolled down my windows, and waited in silence. Hooded mergansers floated while eagles called. Reveille at NAS Whidbey marked the time as 8:00 am. Minutes later, my heart raced as I noticed what I’d hoped to see: a conspicuous V shape making its way towards me along the edge of the lake. As it neared, it submerged. When it hadn’t reappeared ten minutes later, I continued towards the West Beach parking lot. As I passed the road to the campground, I noticed a stout, wet rodent surveying the lake. It swam off, but a second and third beaver appeared. It was worth the wait of over a year when I finally encountered these brilliant builders. I returned to the bench where a beaver tail-slapped the water.

On several subsequent trips, I arrived just after dawn, but before the sunlight had reached the lake and waited on the bench. A beaver broke through the ice and headed east. I hiked the short 0.3 mile distance between the dock and the bench. 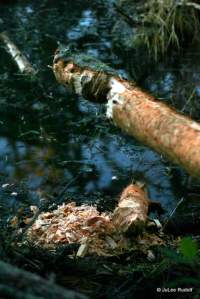 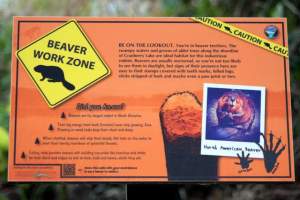 A sign indicated it was beaver territory, but it was unnecessary: felled logs lay in several spots. On a different trip, I met Ranger Rick as he unlocked the gate. He smiled, shook my hand and pointed to the beaver that was in the same spot it had been before – a stone’s throw from where we stood. I saw a second one, but he scared him off. He slipped into the water, sending bubbles to the surface. 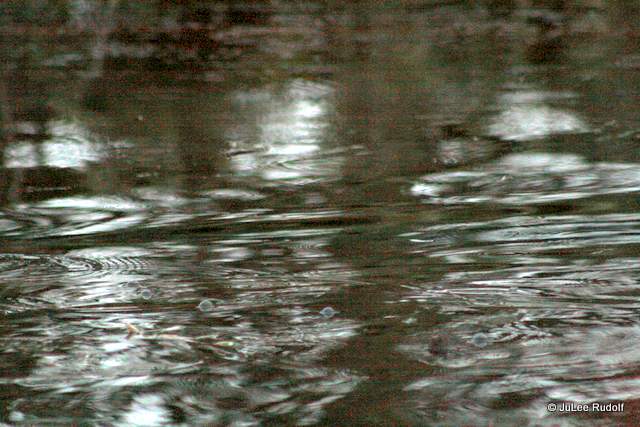 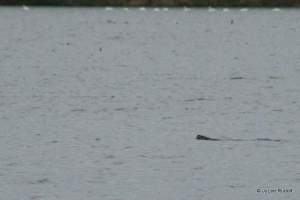 Along the trail to the dock, I flushed a heron, heard a Belted kingfisher’s call, and saw my second set of submerged beaver bubbles. Two swam nearby as Trumpeter swans situated towards the south honked. Yesterday, I made one last trip, knowing that my presence was affecting the beavers’ behavior. The rangers greeted me as I waited. I saw one near the gate. Half an hour later, it was time to go. As I walked back to my vehicle, I noticed what would have been the noisiest salad-making chef ever, ripping away at at thick leaves: a beaver was eating his way through one salal leaf after another. Before I said goodbye to the beavers of DPSP, I snapped one last photo. 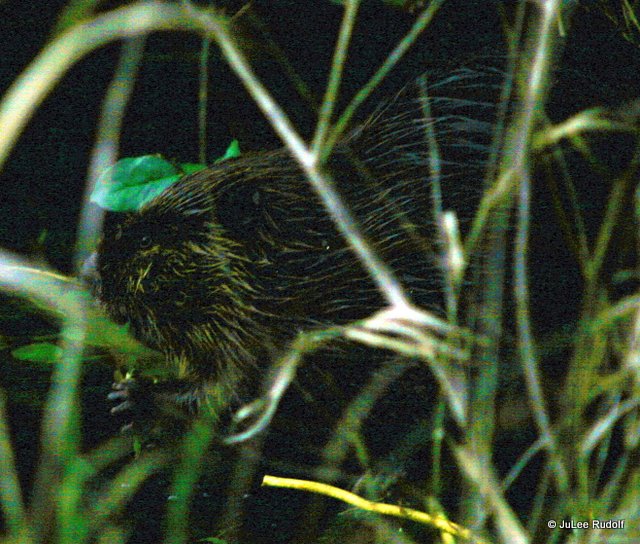 Beaver watching takes perseverance, patience and a lot of quiet. A little intel helps as well. The twilight hours during which you might observe them aren’t conducive to photo taking. Plus, their skittishness makes leaving your camera at home in favor of naked eye or binocular-aided viewing your best bet. Observing these creatures in the wild, a few miles away at a park I’ve visited over a hundred times, reminded me that sometimes…what we are looking for is right in front of us.