Bald eagles are found only in North America. In Washington state, “The early summer bald eagle population when white settlers first arrived in Washington may have been around 8,800…Persecution, the cutting of forests, commercial exploitation of salmon runs, and finally the use of DDT reduced the state’s population to only 104 known breeding pairs by 1980…The population has recovered dramatically with the ban on DDT use after 1972 and increased protection for eagles and eagle habitat…In 2005, there were 840 occupied nests…If there is no decline in the number of nest sites, productivity, or survival, the population may stabilize around 6,000 eagles.” By 1963, with only 487 nesting pairs of bald eagles remaining, the species was in danger of extinction…As the dangers of DDT became known, in large part due to the 1962 publication of Rachel Carson’s book Silent Spring, the [EPA] took the historic and, at the time, controversial step of banning the use of DDT in the United States…Following enactment of the Endangered Species Act of 1973, the Service listed the species in 1978 as endangered throughout the lower 48 states, except in Michigan, Minnesota, Oregon, Washington, and Wisconsin where it was designated as threatened…In July 1999, the Service proposed to remove the bald eagle from the list of threatened and endangered species.” 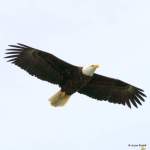 “Once listed as a federally endangered species, the bald eagle’s population rebound is evident on Whidbey, where an aerial survey conducted by the Washington Department of Fish and Wildlife in 2005 revealed 47 nesting pairs of eagles on the island. Since that study, that number has risen to about 52 or 53 pairs, according to [Steve Ellis, former president of the Whidbey Audubon Society]…”On Whidbey, the sight of a bald eagle is often a daily occurrence for many residents.” 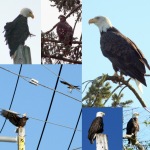 During the ten years I lived on Whidbey Island, I encountered dozens of Bald eagles. In a typical week, I see several of these majestic birds, unmistakable as a bright white head atop a chocolate brown body. They tend to perch on wooden poles along Dike Road in Dugualla Bay, which is the area I photographed the adults in the collage. I observed the juvenile eagle from my living room window! Smaller birds seem to love to pester eagles, like the osprey in the bottom left photo. I’ve learned from observing them that, like people, each eagle looks a little bit different. One of my favorite eagle encounters was of an adult eviscerating a cormorant on the edge of Cranberry Lake in Deception Pass State Park in November of 2014. 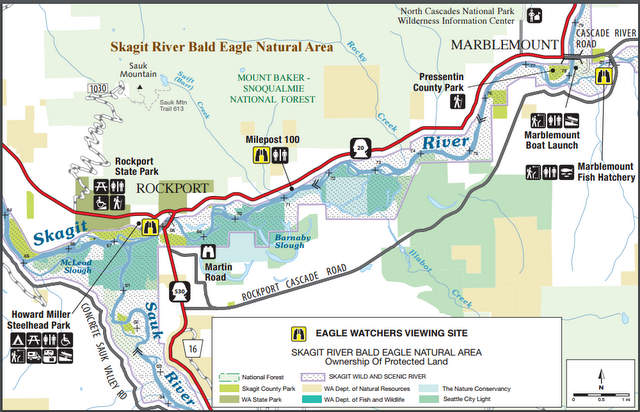 The Skagit Eagle Watchers are a group of volunteers who track eagles along the 55 mile corridor from Sedro Woolley to Newhalem and educate eagle enthusiasts within the 8 mile stretch along the Skagit River between Rockport and Marblemount. The organization publishes a weekly eagle count by zone from mid-December through January. Volunteers observed nearly 160 eagles during the December 31, 2015 count, “The Eagle Watchers Program is a joint partnership with the US Forest Service, Washington Department of Fish & Wildlife, WA Department of Transportation, Rockport State Park and the Skagit River Bald Eagle Interpretive Center. Thanks to abundant runs of wild salmon, the Skagit River Watershed boasts one of the largest wintering populations of bald eagles in the lower 48 states…Since 1992 the Eagle Watchers program has played a vital role in protecting this species by managing the attention they attract.” Find a map of the best places to observe eagles at the Eagle Watcher’s and United States Department of Agriculture site.

Last week, my husband and I made the nearly 60 mile trip from Anacortes to the Skagit River Bald Eagle Natural Area. We arrived at the first stop: Howard Miller Steelhead Park, at about 11:00 am. From the nearby bridge, we observed only one eagle perched in a tree nearby. The highlight was our first ever glimpse of a salmon carcass along the riverbed. Spawning salmon are reason eagles arrives in such great numbers along the Skagit River this time of year. I spoke with a volunteer who said that the lack of eagles that day may have been due to the birds in flight taking advantage of the thermals.

Second stop: Milepost 100, where the biggest surprise was the elderly guy walking along Highway 20 carrying a PEACE sign. One eagle flew high in the sky. A Common merganser swam by, dipping her head underwater in search of food.

Last stop: the Marblemount Fish Hatchery. Two persons carrying cameras walked along the narrow road as we entered the grounds and arrived at a large parking lot next to the hatchery. A dozen gulls waited on the metal gratings over fish filled tanks hoping to get past netting that protected the fish. There wasn’t an eagle in sight…sigh, so we left.

We returned home by way of Highway 530 in hopes of seeing what remained of the Oso Land Slide, “The site of the deadliest land slide in U.S. History. The SR 530 Flooding and Mudslide disaster occurred at 10:37 a.m. March 22, 2014. It took the lives of 43 people and injured 10 others, destroyed 36 homes and flooded 9 others as the slide material dammed the North Fork of the Stillaguamish River.” Signs posted along the side of that stretch of highway prohibited stopping, but we came upon a small pullout with several parked vehicles. An informational sign provided details about the disaster and rows of small trees decorated with mementos, one for each victim. 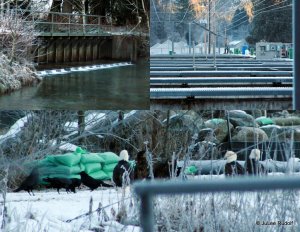 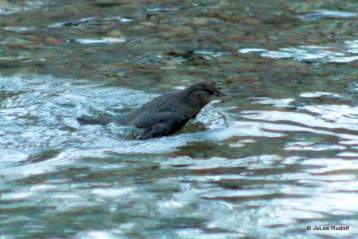 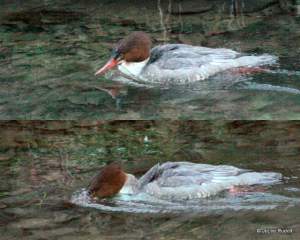 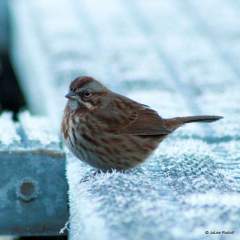 I am not a quitter (plus, I love birds), so I awoke at 7:00 am on the first day of the year to try again during a cold, clear day. En route, I noticed half a dozen hawks perched in trees. Ten Trumpeter swans flew over near Burlington. Everything was covered with a thin crunchy layer of frost that looked like a dusting of snow. I sighted the first Bald eagle of the day at MP 78, another at MP 79 and a third at MP 90. I arrived at At Howard Miller Steelhead Park at about 9:00 am, an hour after sunrise, though the sun barely blanketed the tops of the nearby mountains with a gentle morning light. An eagle perched in a tree near the bridge-just like last time. A pair of eagles watched the river from nearby. Tour boats awaited a trip along the river. My return to MP 100 was disappointing. Again, one eagle. Again, the PEACE sign guy. At the Marblemount Fish Hatchery, I arrived as a white-bearded worker in winter gear shooed away the gulls that were hoping for a chance at the fish protected by netting. I greeted a couple of fisherman who planned to bait fish for Steelhead in the nearby Cascade River. I walked down a path towards Clark Creek and encountered a female Common merganser that appeared to be breast-stroke-like, siphoning the water through her beak. An inconspicuous small brown bird was submerging its entire body at intervals along creek but soon flew off. It was the first time I’d seen an American Dipper! Beyond the creek’s opposite shore, I could see five eagles, three adults, two juveniles, battling over what probably a fish carcass. An adult ate away while the others looked on. This was to be the best spot of the day. As I watched from afar, the hatchery worker encouraged me to move closer, so I did. Before I finally left because my fingers and toes felt frozen from the 25 degree temperature, I snapped one of my favorite shots of the day, of a sparrow on a grate above the hatchery. 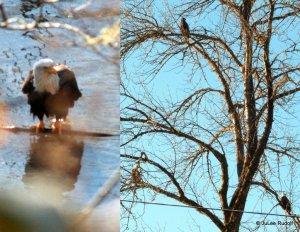 On the return trip, I stopped at a pullout to observe three eagles hunting from the same tree. A fellow eagle watcher showed me a few of the amazing shots he’d taken with his super extreme telephoto lens. Three other eagles were visible: two juveniles in a tree near the river and an adult on a small sand bar within the waterway. I watched and waited while others did same. In my second eagle observing venture, I’d seen: 3 along the highway between Sedro HMSP, 3 at HMSP, 1 at MP 100, 6 at the Fish Hatchery, 6 near HMSP and a bonus one as I reached Fidalgo Island, for a total of 20 eagles in one day…EAGLEMANIA. My advice: arrive as close to 8:00 a.m. (when the sun rises) as you can. Spend less time trying to photograph and more with binoculars. Unless you have a super mega telephoto lens with tripod, your eagles will likely look like tiny white specs. Dress for the weather. Be patient, but beware: eagle watching is addictive. I might just go back once more…