There are several locations within Deception Pass State Park that a person could spend an entire day: Bowman Bay, Cornet Bay, and Rosario Beach (plus the satellite sites: Kikutali Preserve, Dugualla State Park and Ben Ure Island), but most folks wanting to check out the “4,134-acre marine and camping park with 77,000-feet of saltwater shoreline, and 33,900-feet of freshwater shoreline on three lakes on beautiful Whidbey Island,” will likely begin at its main entrance southwest of Deception Pass Bridge, which allows access to West Beach, North Beach and Cranberry Lake.

The water along the perimeter of Whidbey Island (54°F/12°C) is kind of cold for swimming, but Cranberry Lake’s waters are a relatively balmy 55-60°F. Unfortunately, this sometimes results in the park closing the lake due to growth of algae. This past week when I entered the park I noticed the conspicuous red and white signs placed at every entrance to the lake blaming algae for its temporary closure. I’ve often wondered when I’ve noticed local lake closures just how dangerous algae might be to humans, animals and fish. Turns out: very. Find more information at the Washington State Toxic Algae site. When the lake is open for use, which it is during all but a few weeks of the year (the few closures that happen are usually in the month of August), boaters, canoers, kayakers, fishermen (and women), and swimmers can be found in, on or along its shore. Just south of the parking lot, the most spacious in the entire park with space for over 200 vehicles, is a building with a meeting room that can be reserved, restrooms, a concession stand and a place to rent said canoes and kayaks. Buoyed ropes mark the limits of the lake’s swim area.

Last spring when I became obsessed with local wildflowers, I found a prospective source of a plant I’d been dying to see in the wild: the sundew. A site online showed a siting in a marshy area southeast of Cranberry Lake. I parked in the lot near the dock and made my way as far west as I could (which wasn’t far) before a sign stopped me. Foiled in my attempt to find the plant, I was disappointed, but happy to finally make my way to this neat less-utilized area of the park, complete with a dock (fishermen fishing), shade and quiet. Access this area by turning left into the large parking lot just past the park entrance or walk from West Beach along a narrow shoulder along the road that leads through the park, indicated on the map for some reason as Cranberry Lake Trail even though only the last 0.3 miles of the one mile distance is a proper trail.

During salmon fishing season, you’ll find a line of persons fishing along the perimeter of the park along West Beach as well as North Beach, which is located closer to Deception Pass. The North Beach Trail, accessed at the northeast part of the parking lot, provides great views to the north of the Rosario Beach, Bowman Bay and Lighthouse Point as you head east towards Deception Pass Bridge, which is about one mile from the trail head. The trail is easy for the first few hundred feet near the west end once you pass the amphitheater, then becomes hillier, rockier and rootier until the North Beach parking lot, after which it becomes steep (especially as you near the bridge) but, once again, transforms back into a softer, wider, pine-needle-covered trail.

Last weekend, my friend Wanda and I hiked from the trail head east towards the bridge along the North Beach Trail, followed the Discovery Trail southwest to its southernmost point, then northeast to northwest up the Summit Trail, down again to the Perimeter trail, and back towards the Summit Trails from a different direction, Lower Forest Trail to the Perimeter Trail and back (it’s harder than it sounds) for a grand total of nearly six miles and over 1,200 feet of climb. In this way we covered every trail through the Goose Rock area (except a couple of short connectors). These trails are also great for running. In fact, two trail races pass through this area of the park: the Deception Pass Half (there is also a Full) in June and the Deception Pass 25K in December, but both fill up so you must sign up early if you want to join in on the fun. 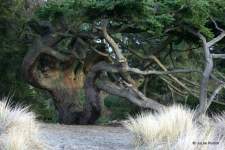 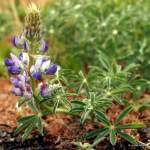 Also from the trail head, walk south through the parking lot towards a wide gravel path past the building and around the paved loop and back along the Sand Dune Interpretive Trail for a 0.75 mile (vice the map’s 1.2 miles indicated distance) mostly stroller friendly (except for the gravel part) trip with views of dunes, Rosario Straight and a zillion year old tree and in the spring provides views of lupines, lilies and an abundance of sea blush. 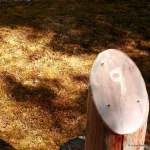 One last hike I noticed only recently while stopped on my way out of the park was the Upland Trail. The sign claims it’s a quarter mile hike that should take about 30 minutes to complete, so I decided to check it out. An informational sign marks the route and explains the trail. Pamphlets explain each of the highlighted items along the route. I confess I was disappointed by the trail, which I completed in fewer than ten minutes even with photo-taking stops. I think it’s a great idea and it might be nice in the spring when things are blooming, but in summer it seemed that several of the items were absent or less than obvious and I couldn’t figure several of them out even though I know a decent amount about the parks plant, shrub and tree species.

At low tide the rocks at the northwest corner of the parking lot, reminiscent of the Urchin Rocks across the way at Rosario (another awesome part of the park), are a great place to see some cool sea creatures, though Rosario’s are more extensive, less sea-weedy, and safer to walk across.

You’ll find aggregating anemones, barnacles, painted anemones (during very low tides-look at the base of the rocks to find them)  tube worms galore (way more than at Rosario), chiton, limpets, hermit crabs and shore crabs. Last weekend when I visited I encountered some kids tide pooling too. We carefully made our way around and across the rocks. Besides the usual, we found feeding barnacles and a Red Rock crab.

Further to the east along the North Beach Trail, and accessible from its own smallish parking lot, is North Beach where you’ll find lots of sand, fishermen, picnic tables, and great views of Deception Pass and its bridges.

West Beach boasts the largest parking lot, the only swimming area, tide pools, many species of birds, trails and, of course, beautiful views, especially in winter. My advice: if you must visit in summer, arrive early in the morning (it opens at 6:30) for the best shot at solitude. And remember to take time for the other, equally awesome parts of the park.As with the rest of the park, summertime brings out everyone and their mother. In winter (shhh…don’t tell), arrive early in the morning to enjoy the park by your little old lonesome.