This weekend I finally had the chance to revisit one of the most vast, flat, sandy, scenic beaches on Whidbey Island: Double Bluff County Park. 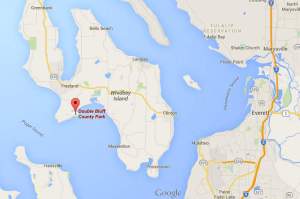 According to the Washington Department of Fishing and Wildlife site, “While the tidelands are a State Park, Double Bluff Park (the upland portion of the park) is operated by the Friends of Double Bluff and Island County. There are bathrooms, outdoor showers, picnic areas and a pay phone at the access area. This is an off-leash dog park. This beach features views to the south of Mt. Rainier.” The harvest profile states, “Double Bluff State Park, also known as Useless Bay Tidelands, is a 24,354 foot stretch of beach on the southwest shore of Whidbey Island. The beach is wide and sandy at the access and becomes rockier with cobble and large boulders towards the west. Two large unstable bluffs are the major feature of the uplands. Clam habitat is patchy and restricted to the cobble areas in the lower intertidal. While butter clams are the species most commonly harvested at this beach, native littleneck clams, cockles, horse clams, eastern softshell clams, and macoma clams are also present in lesser numbers.” My friend Janice (this shot from earlier in the day at City Beach) 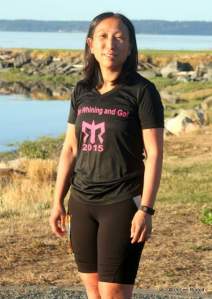 and I were killing time after completing our running distances of Ragnar Northwest Passage 2015 in Coupeville as part of Van 1 while our teammates in Van 2 continued on to the finish line in Langley and decided to check it out.

Heading south on Highway 525, we turned west onto Double Bluff Road and followed it for about two miles. From my last visit, I remembered the tiny lot, which contains fewer than two dozen parking spaces, so we stopped as soon as we found a wide enough stretch of shoulder along the road to pull over, parked, and headed towards the beach. 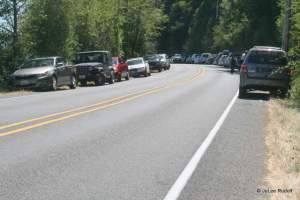 The walk took a while because there were a zillion others who’d had the same idea on this super warm, sunny Saturday. Janice was surprised to run into friends from Bellevue where she lives visiting Double Bluff. Turns out they make the trip often. In fact, it’s their favorite beach. I was surprised at how uncrowded it seemed after seeing all those cards lined up along the road on our way in.

Once in view of the beach,

we noticed the nice waterfront homes to the northeast, 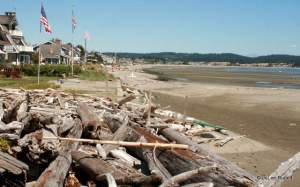 Mt Rainier to the southeast 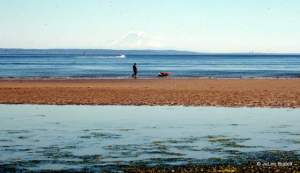 and the bluffs to the southwest. 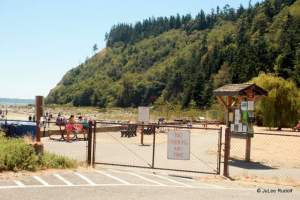 Flags rustled in the breeze of a perfect-weather summer day. I had not remembered that the public was not allowed in towards Shore Ave. A conspicuous sign surrounded by yellow (gumweed) flowers warned, “No Trespassing – Private Beach and Tidelands East of Here.” 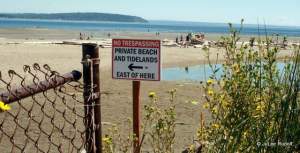 No matter. There was plenty of flat, sandy beach to enjoy to the west. Dozens of persons were there that day, 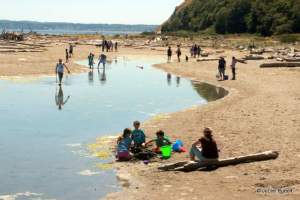 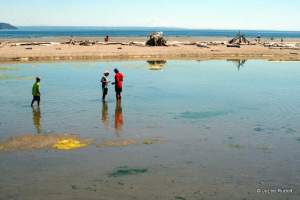 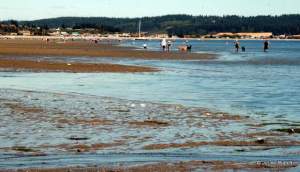 clamming, sunbathing, making sand castles, allowing their dogs to frolic off-leash (permitted) and even swimming. The tide was so low that several boats were beached. 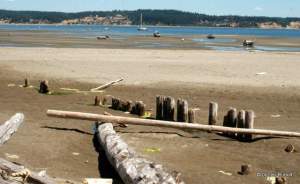 As we reached the stairs from the paved area to the beach, we noticed a couple of guys wearing name tags, each carrying a bucket and a shovel. When asked, they told us they’d held a successful clam-digging class, but had no bivalves to show for it.

We noted the excellent visibility that allowed a look at Mount Rainier and other unknown peaks, wandered past standing salt water, picked our way across a driftwood strewn section marked with a sign and flag to indicate the start of the off-leash dog zone area, and continued towards the tide line in hopes of seeing sea creatures. 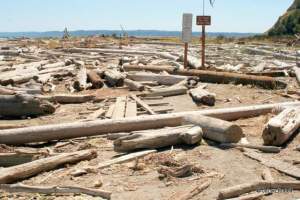 The FETCH (Off-leash parks on Whidbey Island) site paints a can’t-wait-to-take-my-dog-there picture of the place, “Running along the base of steep Double Bluff, the Double Bluff Beach Off-Leash Area is a two-mile-long stretch of salt water beach on Useless Bay. At the base of the bluffs, enormous tangles of driftwood make great doggy jungle gyms. When the tide is out, the beach is hundreds of feet wide but even at high tide, the beach is wide enough for dogs to run themselves to a state of blissful exhaustion.” 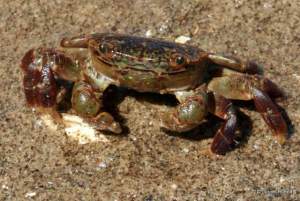 A tiny (shore) crab hung out alone in the middle of an expanse of sand (more from the Department of Fisheries site, “Several species of tiny shore crabs can be found on Washington beaches. Contrary to what many believe, these are not the young of larger ocean crabs, but are simply small sized species. Under most rocks on Puget Sound shores you can find tiny black or gray hairy shore crabs ranging in size from smaller than a fingertip to about the size of a half-dollar. These are of two species, Hemigrapsus nudus and H. oregonensis.”) I suspect it was a green shore crab.
Anemones awaited the waters’ return. 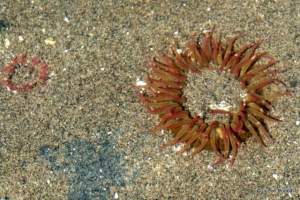 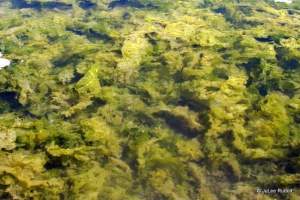 And herons fished while we continued across tiny channels 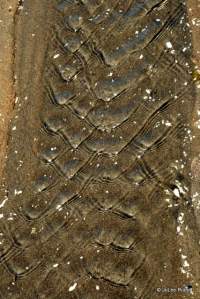 and enjoyed views of the bluff, 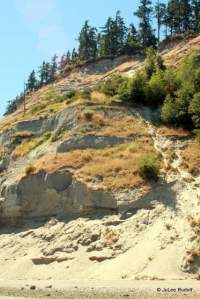 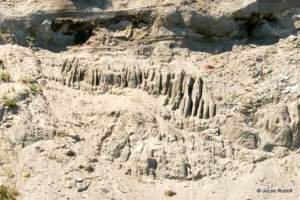 the beach and the mountains. We talked about stuff like individuals’ versus religious rights, the increased difficulties and pressures our (two teenagers each) kids face as they attend high school in hopes of getting accepted into a college they hope to attend versus our own experiences (we met in college), and issues surrounding the Confederate flag while tracking the time and trying to be present (remnants of a vanmates thoughtful talk about being mindful and present while participating in Ragnar) and appreciative of our Double Bluff experience. In less than an hour, we knew we needed to make our way to the Ragnar finish line at the Island County Fairgrounds.

As we neared the shore near the bluff, 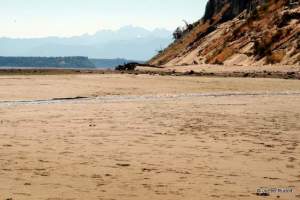 we noticed more clammers, persons finding shade under makeshift driftwood shelters and others along the edge of the beach staying out of the sun and a really rocky area exposed during the day’s low tide. 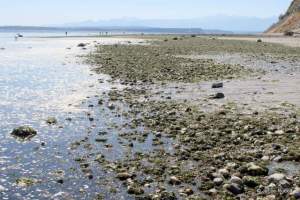 Fewer than 60 minutes later, we made our way back across the sandy, then rocky, then water channel-y, then driftwood-y sections towards the parking lot, passing a red rock crab that looked like I felt after completing over a 25k worth of Ragnar Relay miles, the last half (along West Beach) on just over three hours of sleep. 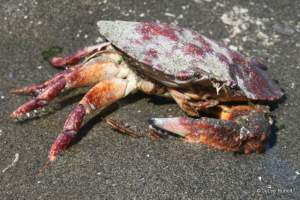 Half an hour later, we’d followed the Ragnar directional signs and runners to the finish line in time to join our twelfth woman, a super speedy gal named Sonia, fly across the finish line. 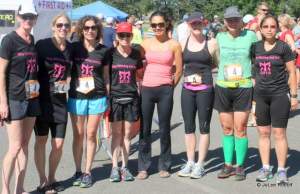 Double Bluff County Park has an extensive, super flat sandy beach that extends for (4.6) miles, beautiful views of mountains (including Rainier), anemones, crabs, bivalves, birds, rabbits, picnic tables, driftwood and lots of other things that make it a perfect place for a quick picnic or hours of fun in the surf and sun.