Every winter I look forward to the arrival of Trumpeter swans in Island County, which, according to BirdWeb, “move south in late fall as water begins to freeze. Most migration takes place during the day, and flocks fly low overhead in a V-formation. Migration starts early in spring, and birds often return to the breeding grounds before the water is free of ice.” This map from NatureServe shows where they live and breed. Our area is shown in blue along the northern part of Washington state’s coast.

We’ve had another unseasonably warm winter, which may be why the dozens of swans that have been hanging out in area of Dugualla Bay appear to have departed. This year was especially great because, according to a state wildlife officials’ count, we had a record number of swans. During the past couple of months, we’ve had over a hundred. That number has diminished lately down to these few stragglers I saw yesterday.

Recently, I realized that the only photos I’d taken of “largest American waterfowl,” weighing about twenty pounds, five feet in length with a six foot wide wing span, were of birds foraging for food in local fields. A few mallard ducks joined them in this photo I took last year.

I decided to try to remedy my no-swan-photos-while-in-flight problem this year, which I didn’t think would be difficult. The Trumpeter swans that show up tend to congregate in an approximately one square mile area of Dugualla Bay bordered by: Dugualla Bay Farms’ fields to the west of Highway 20, Jones Road to the north, Frostad Road to the south and Dike Road to the east. They spend much of their time within the unnamed waterway shown in this Google Maps screen capture (the Clover Valley label is incorrect).

On a super sunny February morning, I grabbed my camera, switched to my (75-300mm) telephoto lens, and headed over to Dike Road where I hoped to get a great view of any swans traveling between the pond and the fields. I took up a spot not far from a dock that extends into the pond. Not only did I see Trumpeter swans, but also Canada geese, Northern pintails, Mallards, Hooded mergansers and other birds that I could not identify. The swans tended to travel in pairs or small groups, calling while in flight. They hang out just north of the pond, in the pond, in the waterway between it and the highway, and in the Dugualla Bay Farms’ fields.

The Northern pintails, shown here on the shore, in the pond and in flight made a neat call. 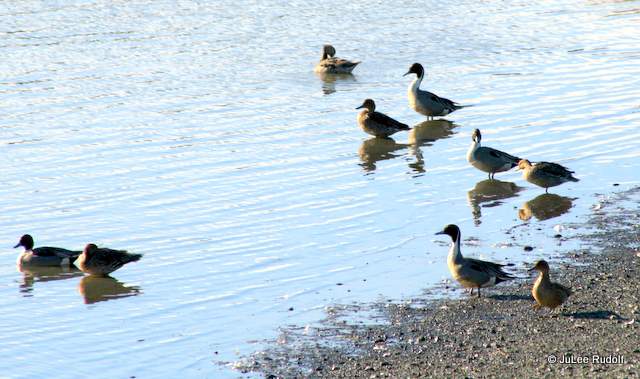 Watching birds in flight is a treat for persons like me. These are Canada geese. 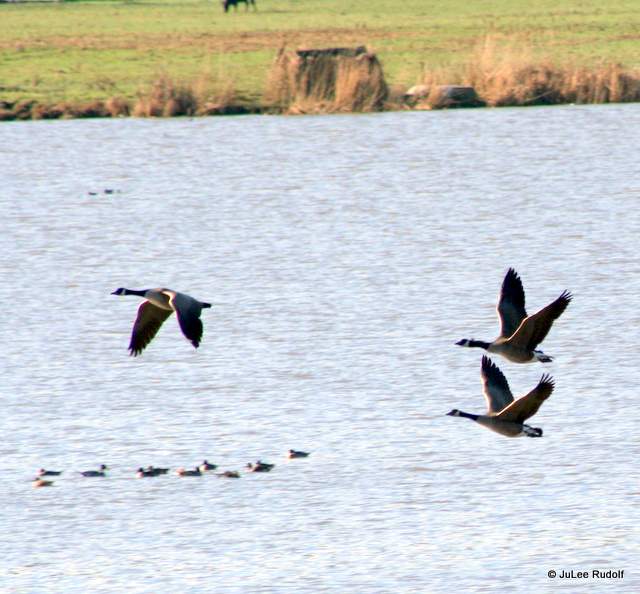 Seeing them land was a different matter. 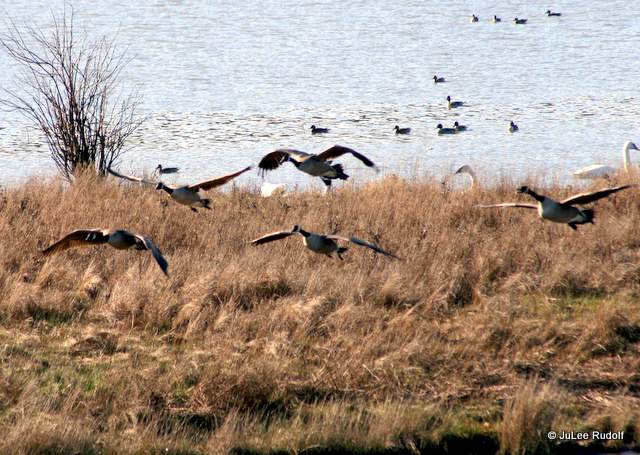 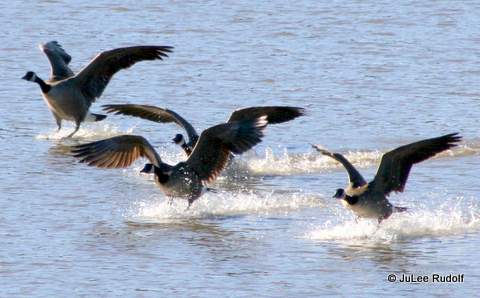 Even for the seemingly super elegant swans.

Although it was noisy (in a cool way), everyone seemed to get along…for the most part. Trumpeter swans and Canada geese spent a lot of time together without incident. In the foreground here are Mallards (to the left) and Hooded mergansers (to the right).

I took the opportunity to check out a gull with a black spot on the side of its head wandering alone along the shore just opposite the pond along Dike Road. It turned out to be a Bonaparte’s gull. Cool fact from The Cornell Lab of Ornithology, “The Bonaparte’s Gull is the only gull that regularly nests in trees.”

Of course, my nemesis (in being impossible to get a decent photo of), the Belted kingfisher, showed up for a few seconds to watch for prey in the pond (and probably mock me).

This small bird arrived alone. I think it might have been a female Bufflehead.

I spent half an hour listening, watching and waiting for the opportunity to get some shots of swans in flight. And did, primarily as they left the water and returned to the land across Highway 20.

Although I’m sad to see them go, I know they’ll be back next winter.