On Saturday, January 31, thirty-one FIRST Tech Challenge Robotics teams from Washington and one from Canada converged on the Kent ShoWare Center at 8 o’clock in the morning to prepare for battle.

Each set up in the pit, a staging area complete with practice fields where teams could test, modify and repair robots if needed.

By 11:00, judges had completed checking robots to ensure they met standards and the pre-contest captain’s meeting. All thirty-two teams were scheduled to play six matches, each while paired with a different, randomly chosen partner, for a grand total of forty-eight matches in initial play. The captain of each of the top four teams after match play would then choose two alliance partners, with 1st and 4th ranked alliance and the 2nd and 3rd ranked alliance competing against one another for a spot in the finals. The three members of the winning alliance plus five award-winning teams would qualify for a spot in the super regionals.

The Anacortes Cyborg Ferrets Team #7198 participated in the first match of the day.

Three girls, two drivers and one captain, wearing lilac t-shirts and tutus from Franklin HS Team #4040 Clockworks formed the second half of the Blue Team. 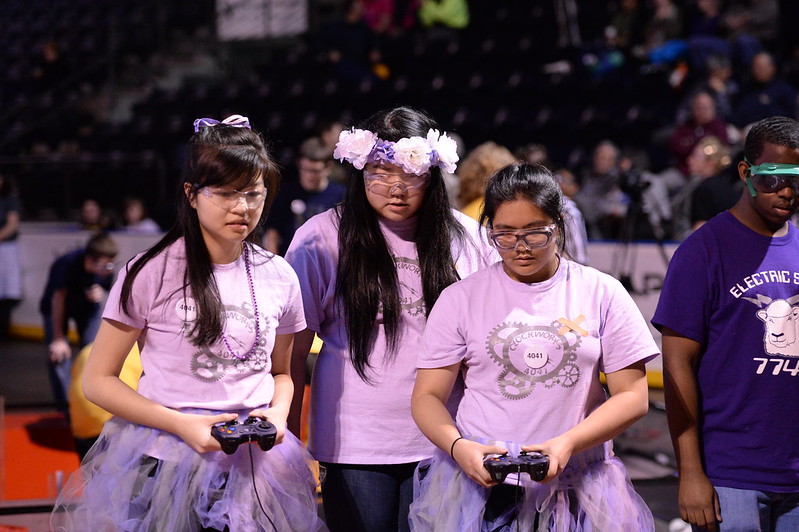 Blue defeated Red, composed of Vashon Island HS Team #5961 Rock Solid Robotics and Sedro Woolley HS Team #9517 RoboCubs by a score of 280 to 186, earning many of the points during the initial 30 second autonomous period by placing balls in the center goal and releasing the kick stand, which drops balls onto the field that can be placed in goals for points. During autonomous, there’s little for the team to do but watch. 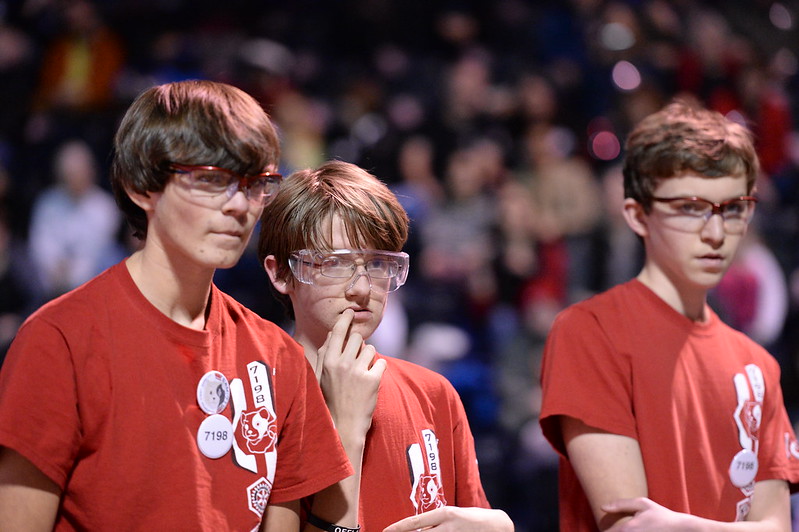 A router glitch delayed matches for over an hour, so they broke for lunch and by 1:00 pm, match play continued. In Match 16, the Cyber Ferrets and Renton’s Hazen SHS Team #8693 Scarabs took on #8437 White Pass JR&SHS Tech Wolves II and #6541 Titan Robotics II from Bellevue’s International School, a team that, at Regionals (Pasteur Interleague Championship), the Cyber Ferrets had offered alliance when they finished first during initial match play. Along with the RoboCubs, the three teams used their combined skills to earn berths at state.

As opponents, Titan Robotics II had no qualms about using a defensive strategy that judges had clarified was acceptable during the pre-competition meeting: robots were allowed to bump their opponents in order to prevent them from scoring.

The Penguin-hatted International School team’s use of the move led them to victory with the Blue Team defeating the Red by the smallest possible margin, one point.

In Match 22, Team 7198 was paired with the red-hard-hatted (complete with a black gear) Union HS’s Geared Reaction Team #6559. Three of four teams scored during the autonomous period. Both alliances continued to place balls in goals during the 2:00 minute period, including during the final thirty seconds or end game. The Red Team barely beat the Blue, Seattle Academy’s Leviatech Team #6157 and Cascade HS’s Hibernotics Team #7342, by a score of 448 to 390.

In Match 26, Anacortes paired with Olympia HS’s Robot C Robot Do Team #8548 against Enumclaw SHS’s Cybourgeois Team #4213 and Edmonds HRC’s Atomic Robotics Team #3805. During the autonomous period, the Cyber Ferrets were unable to score but their partner, Robot C Robot Do scored balls in the center goal and released the kickstand, earning the Red Team significant points. During the two minute tele-op period, Robot C Robot Do became disabled, but had already done what they needed to do. The Blue Team scored balls in a goal but was penalized for knocking over a goal. The Anacortes team scored during the end game and the Red Team defeated the Blue with a score of 246 to 100.

For their fifth match (35) the Cyborg Ferrets were matched up on the Blue side of the field with Seattle Academy’s Tesseract Team #2856 against Lynnwood HS’s Robotics Royals Team #9393 and Olympia HS’s Bearly Digital Team #8457. Tesseract scored a ball in a goal during the autonomous period, then grabbed a rolling goal and dragged it to the Parking Zone. During tele-op, Tesseract employed their signature move: grabbing the 90 cm goal and filling it with balls. Although the Red Team was able to push all three of their rolling goals up the ramp and themselves, they remained there during the end game, earning no additional points. The Blue Team earned additional points by placing balls in goals, especially during the end game. The match ended with one robot on each ramp and one in each parking zone. The Blue Team defeated the Red 479 to 180. Based on the continuously updated match play rankings, the Cyber Ferrets knew they had to win their final match to reach the top four and guarantee a spot in Championship play.

During Match 47, the Cyber Ferrets and Olympia HS’s Team #6424 Oly Cow made up the Blue Team to take on Team #7742 North Thurston HS’s Electric Sheep from Lacey and Team #7364 Mindbot Maniacs of the Neighborhood Group from Auburn. Not much happened during autonomous play, but during tele-op, the Red Team released their kickstand and moved a goal to the parking area. The Blue Team collected balls and placed them in goals, but, unfortunately, knocked over a goal, which results in a penalty. During the end game, Oly Cow scored in the center goal and then bumped the Red Team, preventing them from scoring all the balls in the goal they had intended. Meanwhile, the Cyber Ferrets gave the fans a big surprise by using their robot arm to push the base of the fallen rolling goal, returning it to an upright position (go to 2:48 in the video to see it)!

After initial match play, the Anacortes Cyber Ferretts Team #7198 were ranked 4th place, meaning they’d earned the opportunity to compete in post-match play but would have the least advantage during alliance partner selection.

They chose Victoria BC’s Fix It Team #3491 (Vancouver Island), ranked 9th after initial play, and Vashon Island’s Rock Solid Robotics Team #5961, ranked 22nd after initial play. Teamed up once with Fix and once with Rock Solid Robotics, the Cyber Ferrets’ alliance won both the first and second matches against the Number One Alliance, their former alliance partner Titan Robotics II, End of Line and Robot C Robot Do to advance to the finals. 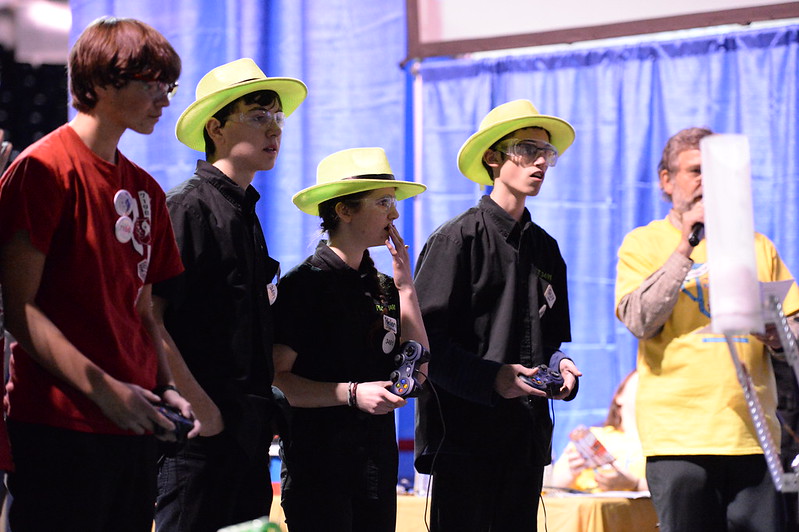 In the first championship matches, the 2nd ranked alliance team, Tesseract, Mindbot Maniacs and Atomic Robotics defeated the 3rd ranked alliance, Geared Reaction, Oly Cow and Zenith in two of three matches to move on to the finals.

In the finals, the Cyber Ferrets’ Alliance defeated Tesseract’s Alliance in two matches!

At the end, volunteers formed a line, announced winners and handed out awards. 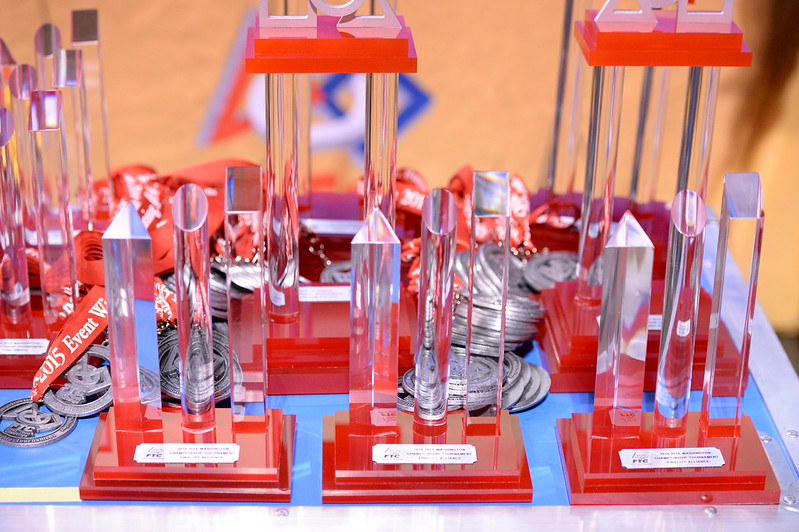 All three of the Event Winning Alliance Teams, plus five other teams (seven of the twelve teams that participated in the post-qualification play) advanced to the Super Regionals, to be held in Oakland, California at the end of March.