Even before our trip, my sister JoDee, who participated in horse 4-H in high school and best remembers the year that our parents gave her a saddle for Christmas in order for her to ride the horses that the people across the street owned–she’d sit on the fence that surrounded them and wish she could be riding, mentioned that they had horseback riding nearby. I hoped she was wrong…

When we arrived at Pacific Beach, which is a really nice, flat, super beach that lies quite south along the Washington coast and extends for miles where we stayed at Pacific Beach Resort & Conference Center, JoDee went straight over to the pamphlet rack and grabbed the yellow one marked Horseback Riding. After learning from the front desk that the place wasn’t far by car, that the staff had never tried it, and returning to our cottage, she called the place. By then, I was a little concerned, but we were far from committing. She was bummed to learn that August was the busiest time of year and that instead of her ideal scenario (riding along quietly together with a guide, enjoying the serenity of the sand and the quiet clomp of the horses’ hooves), it’d be like – 20 horses trotting along with a bunch of folks of differing abilities, squished together, maybe like sardines. Unfortunately, this did not faze her.

We set out for the 20 minute drive to Ocean Shores. I started meditating… We showed up and walked up to this super fat, slobbish guy in an orange, over-sized t-shirt, who chewed, spat, invaded our personal space and told us how this was just his summer job, in the winter he was a professional crab fisherman. Seriously, he looked like a serial killer–if serial killers were fat, which they don’t tend to be. We stepped back a couple of feet and asked more questions about the horse’s welfare, like how often they “work” and how far away they were boarded. His answers didn’t impress us but we were there and decided to go through with it. My sister paid the 40 bucks (20 per person for an hour ride), we signed the waivers and walked off to kill half an hour on the beach. It was a gorgeous day (rare, as you know) and a little breezy and JoDee sweated the number of other persons who were, like us, loitering near the horse place. 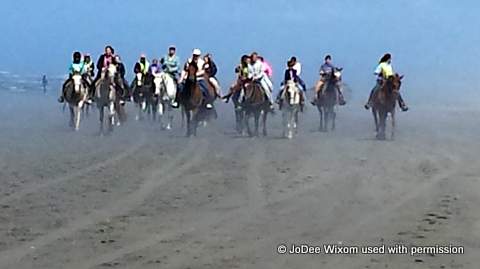 We watched a big group (about 20 folks) on horses heading towards us with the fog following. It looked safe enough so I tried not to sweat it.

We also noticed some unusual sea creatures on a large piece of driftwood that we later learned were goose barnacles. 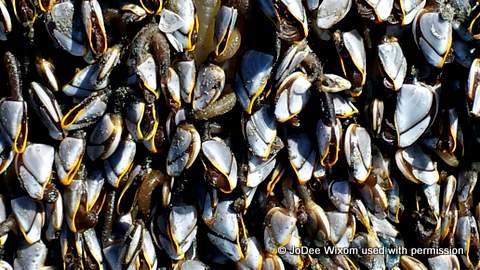 Finally, we headed back when we saw a different group of about the same number of riders headed towards the place where the boss stood. Four girls in their late teens were calling the shots (imagine overly-long story by fat guy in orange t-shirt about the rules concerning workers under the age of 16, blah, blah, blah, they can’t even be on the premises, can’t work very long hours, etc., etc). They helped the current riders dismount while I stood there and started to stress out while JoDee worried that she’d get a too-docile horse.

They lined us up in front of the horses that were tied to horizontal wooden bars, and then went smallest to largest (horses matching humans) without asking who was experienced and who wasn’t, even though we’d had to indicate so on the form (my friend says it was probably because of risk management). The boss gave everyone one last chance at the dorky bicycle helmets, which only the two youngest kids wore. I would have taken one except that he’d told me earlier, “Nobody uses them.” Once they finished with the kids, they placed a couple of teenagers, then a super pretty gal who spent (I kid you not) the entire ride taking selfies. 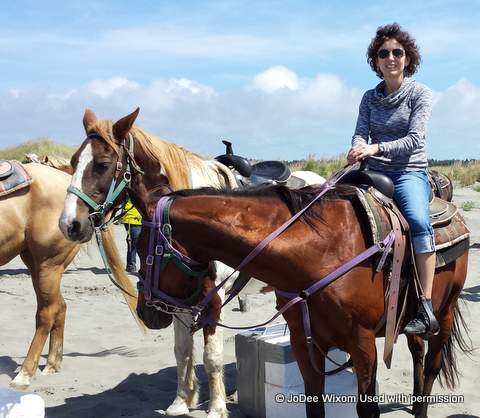 Then they called JoDee up and told her that her chosen horse “was for kids,” to which she (experienced horseback rider) replied, “Maybe you should give this horse to my sister. She’s a beginner.” Thus, I ended up riding Tator, a small dark brown horse with a black mane and tail. JoDee ended up on a bigger, light colored horse that was supposedly also for kids. Fortunately, beforehand I’d asked my sister to ignore me, enjoy her ride and not worry about what I was doing, which was pretty much freaking out the entire time. Her horse walked really fast and she was super confident, so she was up with the leader girl named McKenzie at the front, oblivious to the antics of all the naughty, supposedly “for kids” horses. Since Tator was slow, he’d get behind, then suddenly start trotting to catch up with the other horses. Except for trying to avoid Socks (which was hard as he seemed to have it in for Tator), I spent the whole time waiting for my horse to get behind, start trotting, at which point I’d try to post so that my butt might survive, then feeling relief when he finally caught up and returned to walking. Eventually, we reached the turnaround and for some reason many of the horses alternately stopped to pee. The way back was much like the way out except that I felt a little bit calmer. Except for one point when McKenzie’s horse did this wild thing with his head near Tator and I thought I was going to get bucked off, it was pretty uneventful, with most of the “kid” horses doing the walk-slowly-then-suddenly-start-trotting thing.

When we got back to the start, the guides told us to halt the horses and wait for them to help us dismount, but Tator wouldn’t have it. He wanted me off asap, so instead of standing still, he continued towards the rail as I thought how wrong it would be to survived all that only to get bucked off at the end. Thankfully, I was got off before he did anything dangerous. The fact that I petted his neck several times on the way back and said, “Good Tator, Good Boy,” had no effect on his bad behavior. When JoDee and I met up afterwards, she gushed at how fun it was. Her only disappointment was at not getting the chance to canter off into the sunset with her fast-walking horse. OMG I was just happy to have survived.